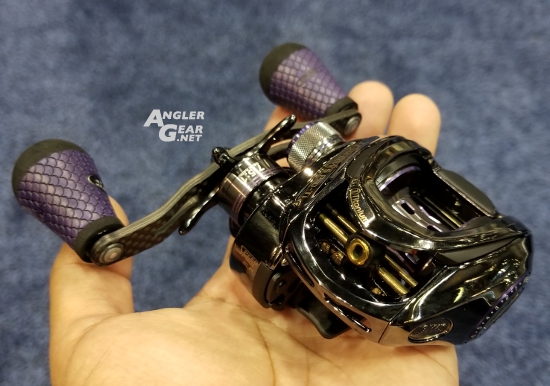 The New Product Showcase is always an interesting amalgam of fishing product.  Its pretty hard to digest what’s in there in just a few short hours after it opens.  Here are some items that piqued my interest. Lews Fishing: Teams Lews Pro-Ti SLP
I’ve seen pictures of this reel after its release back at the Bassmaster Classic but never got my hands on one until today.  This reel looks better in person and feels great in hand. I’ve slowly been impressed by their design changes over the years.  This reel feels like it would be a lot of fun to fish. Daiwa Tatula 100:
I didn’t expect to like this reel as much as I did after handling it.  The one major qualm I had with the original Tatula platform was its sheer bulkiness in an era of reels whose form factor was anything but. This could all be attributed to trying to migrate the Twing system off of the T3 Platform and into a more solid and producible chassis. They made strides to getting the platform a little more compact with the Tatula CT but now this reel will serve to bring even more anglers onboard the Tatula Train. Halo Fishing SnakeSkinz with TuffTip
If you’ve used rod sleeves to any degree then you are already familiar with the fact that the tip design is important.  This particular model from Halo Fishing feature a harder tip section to help mitigate rod tip breakage issues. Real Tree Fishing Dirt Worm
Not sure how I feel about this yet.  They do look rather realistic.  Its interesting to see Real Tree making a hard push into the market. Brite-Strike Solar Powered Lights
These individually packaged lights marketed towards kayak and SUP users feature a solar cell to charge, have an integrated switch and are peel and stick . Costa Pescador Sunglasses
These were rather interesting as their construction material was said to be recycled fishing nets. Omega Custom Tackle Genesis Ti Spinner-bait
I still remember when Terminator and Stanley were at the forefront of Titanium wire spinner-baits in my arsenal.  This is an interesting throw back to those baits and kind of a niche bait nowadays but still a deadly fish catcher.

Duo Realis “Topwater Alabama”
I kind of dig the willingness of Duo to explore the edges of the lure design paradigm.  This is certainly an opposing design philosophy from their well known spy baits.  None the less, I am curious how this rig actually fishes. Svivlo Reels Genesis One
This intriguing reel entry touted a new braking mechanism.  Curious to see how this works. Westin Freddy the Frog
This bait has a rather interesting crawling action out on the water.  Should prove to be an interesting top water enthusiast option.