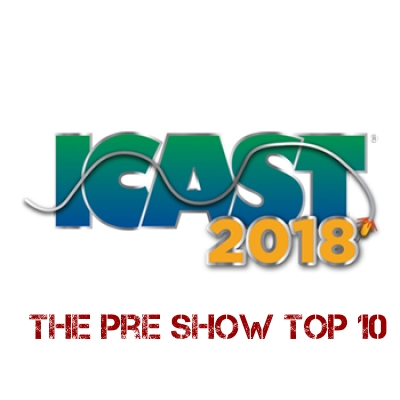 Headed to the big show this year?  Here are my top 10 pre show picks of hot, new, and interesting bass fishing items that you should probably check out.

Whether or not these are pure hype and hyperbole remains to be seen.  None the less, these sold out in minutes upon their initial release.  I noticed some familiar looking profiles in their line up.  However, its hard to ignore an already a proven seller among the ever growing younger generation of bass anglers ready to spend some money. Such a simple design permutation based on an already popular bait platform.  Simplistic yes, but should prove to be an effective option for US frog bassin aficionados everywhere.  This frog should compliment the already popular Sprinker and Honker frogs in their growing domestic bait lineup.

The NED rig has grown immensely in popularity over the years and for good reason.  It simply catches fish.  This new offering from Nichols Lures Inc will surely interest fans of the rig as it allows larger soft plastics to be used in the same fashion as the original finesse style heads. Never one to rest on their laurels, Savage Gear brings a much requested replica into the world of bass fishing with their new Savage Gear 3D snake.  Freshly debuted just last month at EFFTEX 2018 this bait is modeled after the real thing much like their past ICAST Best of Show award winning designs.  A niche bait for sure, this 20cm 25g lure looks poised to be popular with a number of top water action loving anglers. In 2013 Abu Garcia debuted their red Revo Rocket with an industry first a 9.1:1 gear ratio and 37 IPT feature set.  This reel set the bench mark for fastest bait caster on the market.  This title was subsequently taken away by 2017s steez-esq Kast King Speed Demon.  It looks like the folks at Pure Fishing want the title back this year and are debuting an all new 10:1 gear ratio Revo Rocket that brings in an appalling 41 inches per turn of the handle.  Coming in September 2018 for an MSRP of $299.99 Back at ICAST 2012 13 Fishing made their brand debut with essentially 2 rod series, the Omen Black and Envy Black.  The Omen Black has remained a popular $100 price point rod.  The $250+ Envy Black on the other hand was eventually surpassed as the top dog in their rod lineup by the flagship Archangel rod series at ICAST 2014.  Amidst other value offerings within their product lines the Envy Black rod has seemly gotten lost in the mix and was certainly due for a refresh.  I was a fan of certain design aspects of the original Envy Black, but not so much of others.  Regardless, I am glad to see them revisit this rod series and implement some bold new design ideas alongside a higher ton blank. MSRP starting at $299. This reel made its initial debut at Yokohama 2018.  This flagship spinning reel incorporates a combination of the the Daiwa Monocoque Body and LT (Light Tough) concept. It is effectively the next reel design in the midst of Daiwa’s monocoque design paradigm.  This design feature platform which was debuted in 2016s Certate spinning reel model essentially optimizes the envelope for the main gear relative to the body and stem.  Allowing a maximum gear size to a minimization of main body material while still maintaining frame structural integrity.  Featuring a host of other premium features including Mag Seal, Tough Digigear, and Zaion Air Rotor this flagship reel is sure to please many spinning reel enthusiasts. After almost a decade of exposure to the latest and greatest from ICAST I try not to throw around the term “Game Changer” that often.  I think Ive correctly called on a few in recent years (i.e. Tatula, Spybaiting, Ultrex, Emergence of Favorite Fishing) and missed on a few others.  If there is one product this year that deserves the “Game Changer” label this is probably it.  I think we all dream in 3D, where one day our angling electronics can render a multi dimension environment with photo accuracy at all times all around the boat.  The technology is slowly getting there from multiple angles and various OEM technological approaches.  Garmin’s Panoptix Live Scope is certainly a step above their original Panoptix with some rather realistic rendering.  Pricey new technology isn’t for everyone, but its nice to see the design envelope continually getting pushed each year. MSRP $1499 In my mind the Kistler Z-Bone epitomizes the best mass production, performance based, Made in America, bass fishing rod.  With its subdued more classic styling this rod series is all about performance that actually lives up to the marketing hyperbole.  Back at ICAST 2010 GLoomis audaciously launched their much hyped NRX while Kistler more or less quietly debuted the original Z-Bone series with none other than Gary Loomis himself and his new blank company at the time North Fork Composites.  These original Z-Bone rods featured the highest rated NFC blank dubbed Next HM.  After that particular show I purchased both an NRX and Z-Bone rod.  Suffice to say, ever since that time any angler I’ve talked to who was serious about stepping up their rod lineup and getting a serious fishing tool I would subsequently strongly recommended the Kistler Z-Bone.  Praise aside, the new updated Z-Bone takes advantage of the latest in technology and leverages North Fork Composites new state of the art HMx-ray Blanks, a Fuji Torzite titanium framed stripper guide and Tip, alongside tangle free K frame running guides.  Coupled with some customer feedback and improvements over the originals this rod series is also backed by a 5 year warranty.  You can read about and look at pictures of bass fishing rods on the internet for days.  However, until you’ve actually fished with one you can’t truly understand what an amazing rod the Z-Bone can be.  MSRP starting at $519 So many different ICAST shows and so many permutations of the Curado…  If there is one reel that dominates bass fishing (and peaks ICAST bass aficionados interest), the Shimano Curado is probably it.  With competition from all over it only seemed fitting that Shimano flex its design muscles once again and implement its already proven DC technology into this particular reel series.  Digital Control technology is certainly not new and has been a feature in arguably two of the best US flagship reels Shimano has ever offered (Calcutta TE DC and Calais 200DC).  Interesting enough, the technology has been vastly incorporated into a number of JDM Shimano reels along with various I-DC permutations.  None of which has managed to makes its way stateside over the years.  I’ve been told in the past from reps that the reasoning was due to the use of the I-DC trademark vs. other popular “I” product that is all over the US marketplace.  None the less, if you’ve ever had the chance to fish with Shimano DC technology in the past then you already know how amazing it truly is.

The Curado 150 DC implementation of Digital Control is much more simplified than what you would find on the Flagship 2006 Calais 200 DC system.  However, I believe this technology at this price point will be a treat for many. If Shimano has their way, it will ultimately bring many new and old school bass anglers back into the Curado wheelhouse once again.  Its a simple proven technological move into a known value based product for Shimano while simultaneously being a loud Zing across the bow toward its competitors and beyond. Have a great show.