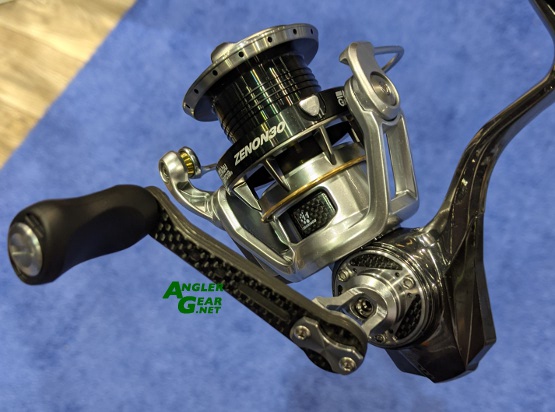 ICAST 2021 is off to a fast start with a pretty strong crowd.

Here are a few of this years floor finds.

One of the pre show hype reels was the Tatula SV 103 Limited. Turns out to be rather gorgeous in person.

The latest Steez to sit atop of the Daiwa Baitcast food chain implements the all new Hyper Drive Design. A combination of four integrating technology enhancements, Hyperdrive Digigear, HyperTough Clutch, Hyper Double Support and Hyper Armed Housing. Marketing jargon aside, this effectively improves the overall smoothness and structural rigidity over the previous generation.

The expansion of the Monocoque design paradigm continues down the spinning reel product line and into the popular Ballistic Platform.

I was/am a big fan of the original USDM Steez rod line up. At the time of their release in the North American market they were one of the very few black foam split grip models you could find on the shelf in a sea of full cork bass rods. Over time that line up has expanded into the now defunct Fle-X-Lite, SPX Megatop, XBD Frog (Perhaps the greatest frog rod ever), XT (value line) and ultimately AGS line. The latest AGS lineup features new and improved AGS guides with SVF Complie-X construction and new Nanooplus resin. The Air Sensor reel seat is a nice homage to the original Airbeam seat. The rods feel great in hand but seem a little watered down from the stylistic cues and general “STEEZ” that was the original. MSRP $549.99

These are one of those items you have to just get your hands on and see in person to appreciate how crisp and clean the image is on the full HD touchscreen. Graphs are just getting insane.

After months of hype and what seemed like multiple delays. Humminbird MEGA Live Imaging makes its debut. This much anticipated competitor to Garmin’s super popular Live scope and Lowrance’s Active Target sonar options should hopefully be a hit with Humminbird fans. MSRP $1499

Pretty sure that’s the most tactical fishing grip I’ve ever seen.

The Goggle buff looks like an interesting concept. Might make a long cold morning run a lot more comfortable.

The ProFishiency Krazy Baitcast reel has to be one of the most eclectic paint schemes I’ve seen on a reel yet.

I’m personally a fan of full CNC molds but its nice to see expansion of the Essential Series line to bring more people into the hobby,

Back due to popular demand. Still remember its debut circa 2010? Guess this makes it a classic?

Yes I know there’s a new Curado. Yet that’s part of the problem is there is ALWAYS another new Curado. The name sake is approaching the point of obfuscation in my head after owning so many variants over the last two decades. However, the Calcutta/Conquest lineage demands the utmost respect with each release cycle. These flagship pieces are heirloom quality and have stood the test of time as premium machined offerings. I’m not sure if round reels will ever really be en vogue, but a reel like this will have a hard time disappointing any discerning bass angler.

Speaking of Curado. I think the most impressive thing I gleaned from it is that it (150 MGL) nonchalantly sits at about 6.5oz overall weight with a 150 form factor. I can remember the Daiwa TDZ being a weight “game changer” with its 6.2 oz magnesium frame. Nowadays that weight class seems heavy given all the 5 oz range reels on the market. The 150 MGL is a nice piece and palms well. That being said my favorite Curado at the show was the 70 sized BFS model. While technically more of a classic release I still think Its pretty neat to see BFS permeate into the US mainstream with this model.

Pork is back! Uncle Josh Celebrates 100 years of the Original Pork Rind Bait with this commemorative 3 jar tin set

Utilizing the Powerlux 1000 resin system Abu Garcia has created its lightest and most high performance rod to date. A step up from the Fantasista Premier rods with minimalist implementations. MSRP $399

Due for final release this fall the ultra premium Zenon 30 will pair well with its namesake rod counterpart. Kind of begs the question “Why wasn’t there ever an MGXtreme rod series?”

The Danco Premio AI pliers were one badass piece. I immediately recognized the implementation of topographical optimization in their design. The organic form factor is awesome. The $700 price point not so much.