The bass fishing community experienced a great loss last week as the famous Lake Dixon bass nicknamed “Dottie”, for the easily identifiable mark on her gill plate, was found floating Mothers day weekend. To the average bass angler this may not sound like a big deal, but for anyone following the tale of this giant fish it really hits home. I first learned of “Dottie” by seeing her on the cover of the June 2001 issue of Bassmaster Magazine where San Diego big bass hunter Mike Long was shown holding a 20.12lb fish, caught by dead sticking a Castaic Swimbait, after initially losing her on a white jig earlier in the day. I again spotted “Dottie” online in the spring of 2003 when she was weighed in at 21.7lbs this time in the hands of Jed Dickerson, caught using a Mission fish Swimbait.

2005’s Sowbelly by Monte Burke chronicled the quest for this fish amongst the San Diego big bass trio of Jed Dickerson, Mac Weakley, and Mike Winn and the rivalry that existed between them and Duo Mike Long and John Kerr, all while she still swam in the depths of Lake Dixon. Interestingly enough “Dottie” decided to show her full potential in March of 2006 at an amazing 25.1 lbs (unofficial) this time caught and released by Mac Weakly and the San Diego trio. At which point incessant controversy for The World Record ultimately ensued…

It’s been over two years since that day and for some anglers who know her history, it is saddening to see her pass. She was a beautiful fish that will now provide an intriguing tale to live on in the minds of bass anglers for years to come. 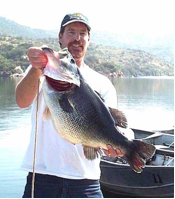 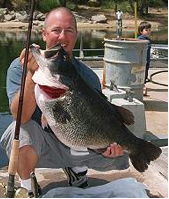 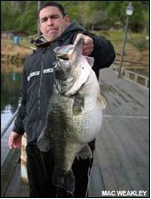 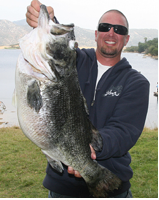 Note: I found Monte Burke’s Sowbelly: The Obsessive Quest for the World Record Largemouth Bass to be an excellent read. Burkes writing style makes the book insightful as well as thoroughly enjoyable and educational from cover to cover. I would recommend it to anyone. I expect the book to be updated in the future given the recent developments in the past two years.

The latest edition of his book can be found here: