The most revolutionary feature of the new Daiwa Fuego spinning reel is the Zaion frame material – similar to inexpensive graphite frames in regards to weight and corrosion resistance but more similar to aluminum in terms of strength and resistance to flex. The Zaion material lends the reel a distinctly “warm” feel compared to metal – similar to a Pfleuger President with a lighter spool.

The spool on the Fuego 2500 is much larger than a 2500 class Shimano reel – 50% greater diameter and nearly 100% greater circumference. The depth of the spool permits use of heavier line – perhaps as heavy as 15# fluorocarbon. Both casting and retrieve speed should be impressive with such a large spool. Despite the oversized spool, the reel body itself is minimal in size – part of the Digigear design philosophy.

The handle on the Fuego is lightweight red anodized alloy and fully machined – and the handle screws directly onto the main gear – instead of cross bolting thru from the other side. In brief, the new 2009 Daiwa Fuego is among the smoothest spinning reels I have ever used – less effort is needed to turn the crank than any other reel in my arsenal. Not a hint of grinding or resistance.

The Fuego balances very well on a light weight spinning rod such as the 6’6” St. Croix Premier Medium I selected to use for evaluation. The St. Croix rod has a fast, whippy tip section – which helps take advantage of the wide spool to maximize casting distance.  Using 8# Seaguar InvisX Flurocarbon line I was able to precisely place a 5” senko approx 30 yards away, right up against the target I was aiming for time after time.  After several days of fishing the spool of line was perhaps 30% diminished – but the reel continued to cast and retrieve flawlessly. Most competitive reels would have to be re-spooled to maintain casting distance, with the Fuego you can just keep on fishing.

When you flip open the bail, it clicks positively – very little chance of premature closure.  The shape of the bail wire and the huge distance between the bail wire and the spool lip all but guarantee a “balk-free” outing. This is in stark contrast to the Phunny reels – which I have experienced countless backlashes using a variety of lines. Very impressive Daiwa!

The smoothness of the retrieve can only be compared to models costing twice or thrice the price.  Drag is super-smooth and linear – I was able to tune the drag from just a few ounces of pull all the way to 9 pounds with buttery smoothness. Nothing under $300 comes even close – sorry Shimano. The light weight and low cast resistance of the Fuego allows the angler to inflect more action into the rod to help skip baits under docks and control the flight of lures in windy conditions. This is a reel you can literally cast all day without fatigue.

The first step is to remove the spool – around the rim of the spool cap you can see the rubber seal to keep contaminants out of the drag system. Also notice how wide the drag washers are for a 2500 size reel.  Once the spool is in-hand you can begin to appreciate the machining that went into it’s manufacture. All the excess material has been cut away, very lightweight compared to Quantum or Shimano aluminum spools.

Time to remove the handle – and it screws off in the opposite direction used to retrieve – just hold the rotor and turn the handle. The opposite side you will find a chrome cap – screws off easily to reveal the inner race of the main gear bearing.

Remove a clip, a pin, a screw and a brass nut and the rotor can be removed. The rotor is extremely light yet the bail wire is robust and smooth. The Nitride line roller contains a ball bearing to eliminate friction.

The chrome accent on the back of the reel comes off with a single screw.

The handle side plate can be removed at this point – and here comes the surprises. The first unexpected find is that the screws are not the typical fine-thread 25 turns till tight machine screws – they are basically self-tapping screws designed for plastics. Once all 3 screws are removed the second surprise – a magnesium side plate!!

The oversized bearing and beautiful bronze main gear are revealed once the lid is lifted on the crankcase.

The one way bearing and brass pinion gear are removed from the front of the reel. One must remove the bearing from the non-handle side to release the main gear – then the oscillating shaft can be easily removed as well as the oscillating gear. The oscillating gear is shielded from the Zaion frame by a chrome washer – to prevent friction and wear. Interestingly, similar washers were found behind the red anodized plate on the gear case cover .The presence of these washers – in this case to prevent galvanic corrosion – indicates the side plate is magnesium opposed to an aluminum alloy.

The Daiwa Fuego spinning reel should prove to be very useful tool on the water for about the next ten years. The Zaion material allows for a feathery weight and good balance and feel in hand but at the expense of service life. The screws holding the reel together have a particularly coarse thread designed to grip into plastics – internal screws were treated with Red Loctite from the factory to prevent them from working loose. The reel is designed to run smoothly for years with just the addition of oil on the bearings – not designed to be rebuilt twice a season like today’s low-profile baitcasters. 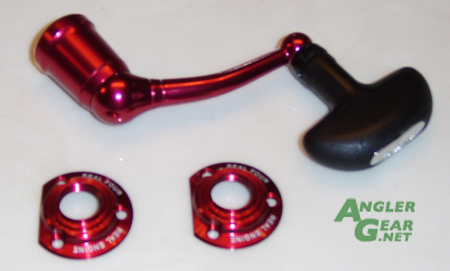 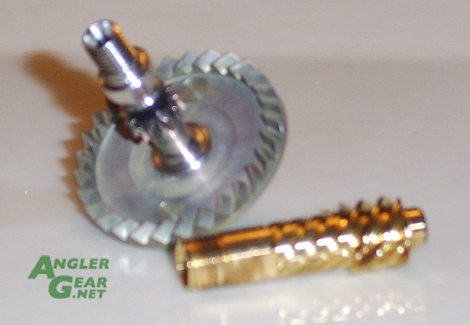 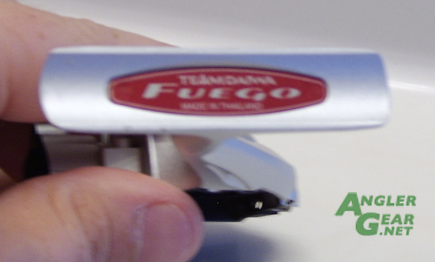 Made in Thailand – for a change. 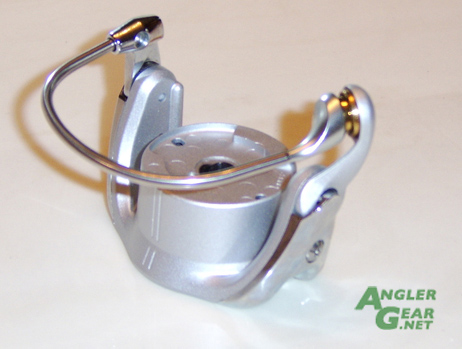 You can find the New 2009 Daiwa Fuego at: Tackle Warehouse