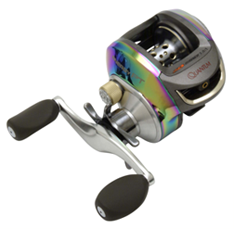 A curious occurrence has happened this past weekend as the expiration date (5/31/2008) of Quantum’s REEL DEAL has come and gone. As I had expected a few online e-tailers have drastically lowered the price of their Tour Edition PT, Energy PT, and Accurist PT reels. All of this activity is hopefully a signal of newer things to come!

The current PT lineup has been around since late summer of 2005 and in the hands of Quantum pro staffers before then. These reels have won over the hearts of many, and have disappointed just as much. As a Quantum user since 1999 I’ve seen, used, and abused what they have defined as “Performance Tuned” baitcast tackle. The Accurist PT, E600s PT, 2006 Energy PT, and Tour Edition PT series of reels found a home amongst many American anglers arsenal, including my own. However, in all honesty, as much as I love the “tank like” durability of my TE1170PT (9.75oz), E750PT (9.55oz), and AC500PT (9.35oz); I also despise their “tank like” weight. Holding my TE1170PT as it sits on my Quantum 7’mh Superlite rod almost seems sacrilegious!

I know Im not alone in wondering why Quantum reels have steadily increased in weight over the years. Many anglers I’ve talked to have found that Quantum’s relatively high M.S.R.P. vs. 9.0oz class weight baitcast reels make them hard to justify against the competition. With Shimano slated to release their new Curado/Citica lineup, and the new Abu’s already out catching fish I fully expect Quantum to bring forth a revamped PT offering for 2008.

I for one am ready for the next generation of PT reels to hit the market. Features I have enjoyed and would expect to see again are, infinite (actually 9 click) ACS cast control, hot sauce lubrication, a titanium vacuum deposition finish, and a capless screw handle design. A feature I and a number of other Quantum fans would really like to see is the use of magnesium. Quantum seems to have been losing ground in the race for a lighter baitcast reel. Shimano has many fans of their 5.9 oz Chronarch 50mg. Daiwa’s use of their proprietary “air metal” magnesium alloy over the years had evolved into the 2006’s Steez 103HA (5.5oz) which made it the lightest baitcaster on the planet. Moreover, last years Shimano Core and Revo Premier have taken hold of the 6.0oz reel class. Quantum I really hope your engineers have at least caught on to the fact that one of the most important variables in human ergonomics is weight! One thing I know for sure is that this angler’s hands are always waiting to fish with something new, and if Quantum doesn’t drop the ball, one of those new reels will hopefully be a “lightweight” 2008 Quantum PT. 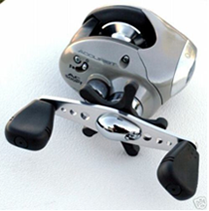 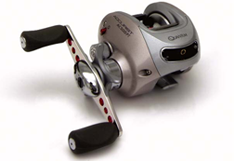 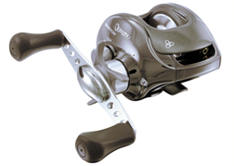 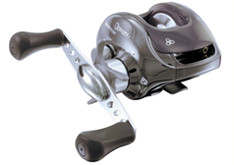 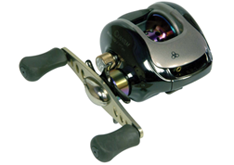 Quantum E650PT and 860PTxm (top of the line of this generation) 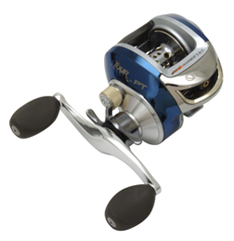 Note: As you hopefully await a new quantum offering, consider the awesome deals on the Tour Edition and Energy Reels going right now!