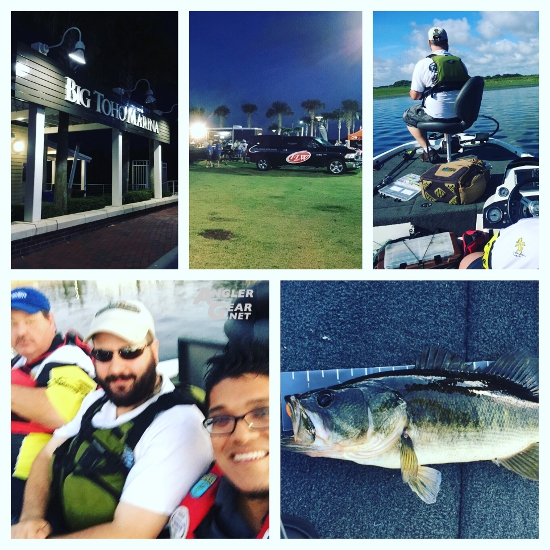 For the second year in a row the American Sport fishing Association and FLW outdoors hosted a number of companies and media to some friendly competition via a bass fishing tournament known as The ICAST Cup.  This four hour event is essentially a way to get media and companies showcasing product together. The ICAST Cup and ICAST On the Water events are the resultant product of 2014’s experimental Tackle X.  The main goal of all of these events remains the same and that is to actually have media and buyers try out a few of the latest product offerings before the annual Best of Show voting takes place at the New Product Showcase on Tuesday night

For the past two years this event has taken place at Big Toho Marina. As a born and raised Florida angler, I always smile when I see the beautiful and modern facilities at the iconic destination that is Big Toho Marina.  The renovated shop and marina is a far cry from its former quaint complexion.  The old  shop is unlikely known for its cameo in the 2008 movie Bait Shop starring comedian Bill Engvall and Billy Ray Cyrus. Yet, also perhaps best known as the location where Dean Rojas set the Bassmaster one day five fish limit of 45lbs 2 oz.

The fully stocked store is a great place to grab some ice, food, and tackle right before heading out for a day of fishing. You might have seen owner Mark Detweiler cheering his son Cody on at this past January’s Bassmaster Southern Open where 2oz separated him and eventual first place finisher Wesley Strader. Having had the privileged of sharing a boat with Mark I can’t imagine a better man and family representing this storied locale.  If you are ever in the area to fish the Kissimmee chain of lakes I highly recommend a stop here.

My draw for this event was Monte Spencer of Double X Tackle and Douglas Roberts of FISHNFX custom rods.  Double X Tackle is a tackle manufacturing  company based out of Colorado whereas FISHNFX specializes in custom made rods.  Our crew graciously made use of  Scott Burdick’s (one of Monte’s friends and owner of Custom Catcher lures) rig to hit the tannic waters of Lake Tohopekaliga. I have a mixed history with this chain of lakes having had some amazing days of fishing and others ending in complete frustration.  While the ICAST Cup event was entertaining the fishing in our boat proved rather challenging given the area we chose to fish.  None the less, we managed one keeper for show to keep the skunk off. Thanks for the great time to my partners and congratulations to team Enigma Fishing for an impressive showing on a hot July morning. ICAST ON THE WATER

My time at ICAST on the water had to be cut short to make afternoon press conference appointments.  None the less, I was able to get my hands on some hot products before the show started and get a feel for what I could find in the New Product Showcase later that night.

Below are just a few of the items I encountered. An organized array of tents feature the latest tackle for 2016