I’ve got to admit I’m kind of a random lone wolf when it comes to ICAST.  Rather than being restricted by the confines of a pre-established media paradigm its always much more enjoyable to just go check out the product I’m interested in personally.  After cruising the show floor for a couple of hours this morning I was certainly impressed by a number of items and disappointed with a few others. A lot of hype gets pushed behind some products whereas others fly under the radar and gain momentum at the show and once they land in the end users hands. None the less, this is shaping up to be a great show.

Here is a quick look at some of the action from the show floor this morning.

While the Smoke spinning rod and reel, KVD Cranking Classic Baitcast reel, and Linder Signature series are cool the biggest buzz out of the Quantum camp was the “Exo” series of rods and reels. Pre-Show Hype was well executed by Quantum as they certainly kept their target audience guessing as to what was coming. Quantum is a brand that definitely aims to establish themselves as an innovative leader in the industry.  Once considered the young guns, they’re representation now includes the most seasoned  veterans of the sport.  With the launch of the new “Exo” series of rods and reels Quantum is certainly starting to establish themselves at the fore front of the industry.  The buzz phrase at the booth was “metal where it matters” echoing the design philosophy behind the reels.  This new series certainly takes a minimalist approach with the FEA optimized all aluminum skeletal frame. They also feature Quantum’s CSC drag system (carbon, stainless, and ceramic stack), “Exo Cast Control” (ironically enough must be accessed on the reels interior by removing the side plate).

After playing with the combos on the show floor all I know these bad boys will make it into my personal arsenal A.S.A.P. 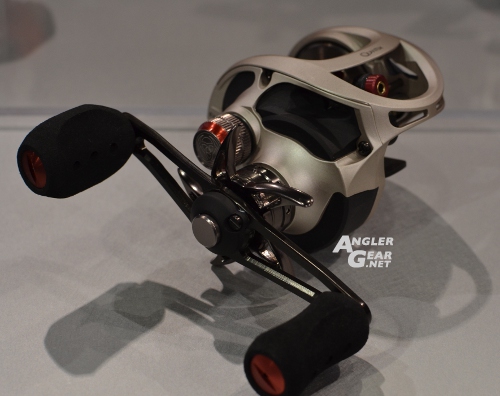 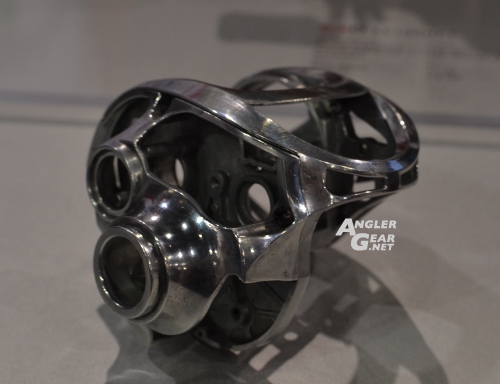 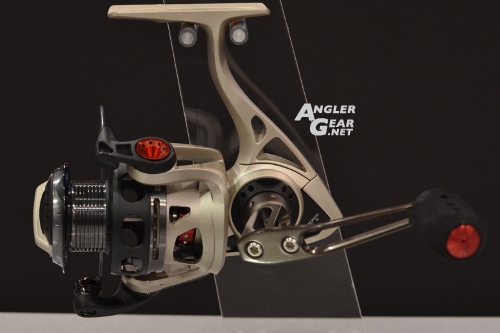 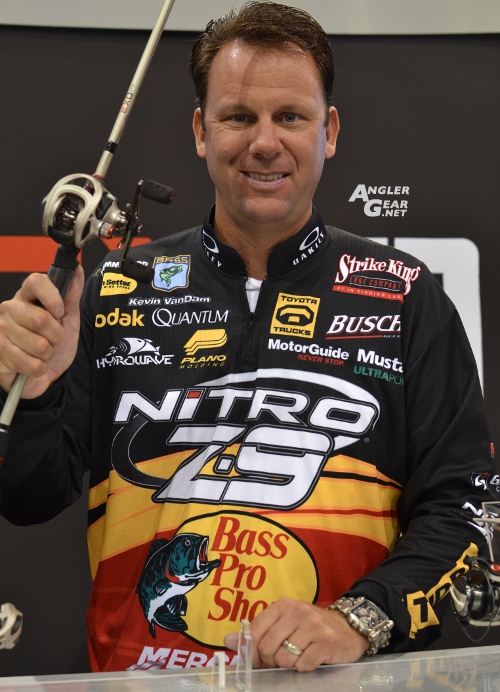 KVD impressed with the new Quantum Exo Rods and Reels.

Daiwa brings some new toys and technology to the fold

Any avid Daiwa fan will be happy to see that the pixy has finally landed on US soil. The 5.3 oz PX type R is certainly a tight little enthusiast grade reel that will pair up nicely with the Steez SPX rods launched last year and the Z200 sized reels are certainly a sweet 200 sized low profile powerhouse.

I was most impressed with the debut of the T3 series of reels.  The much anticipated T-Wing system makes its debut on two separate series.  The T3 and T3 Ballistic both feature the T-Wing System as well as Magforce 3D and Zaion based frames.  Both series will be made available in left and right hand retrieve models in 6.3:1 and 7.1:1 gear ratios (26.3 and 29.5 IPT).  Form factor between the two series remains the same with noticeable design differences being bearing count, handle and spool implementation. The T3 will weigh in at 6.5oz and the ballistic at 7.8 oz. Retail price points are $429 for the T3 and $249 for the T3 Ballistic

Other new items brought by Daiwa were a slew of new spinning reels including the new Certate ($499) featuring a “zaion” based “air rotor” as well as a new “mag seal” design and “nano magnetic oil.  The other freshwater spinning models include the Zaion based Ballistic Spinning Reel ($199), Mid-level  Procyon Spinning Reel($149), Aird Spinning reel ($89) and entry level Legalis Spinning reel. A 7.3:1 Hyper speed Megaforce ($89) also made its debut as well as the budget Laguna ($59.95) baitcast reel. 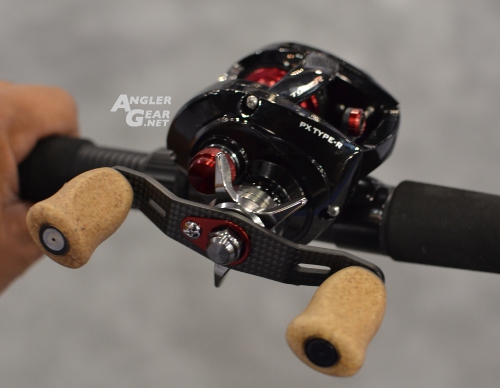 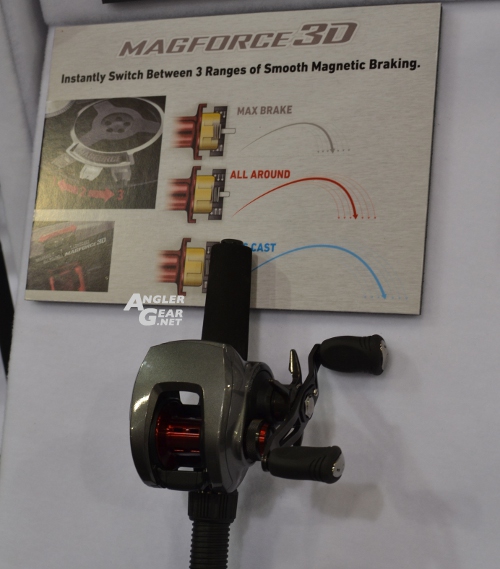 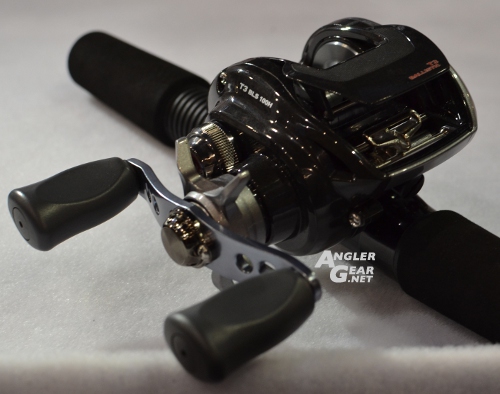 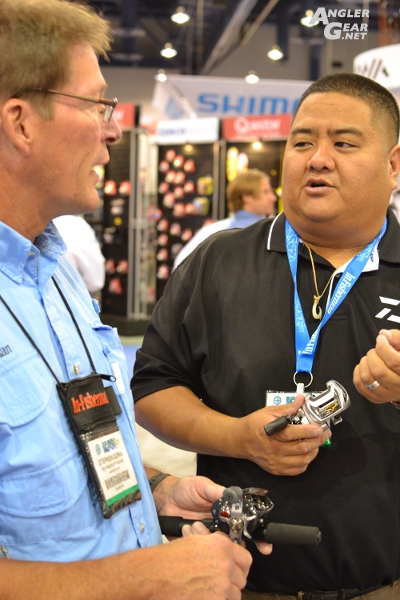 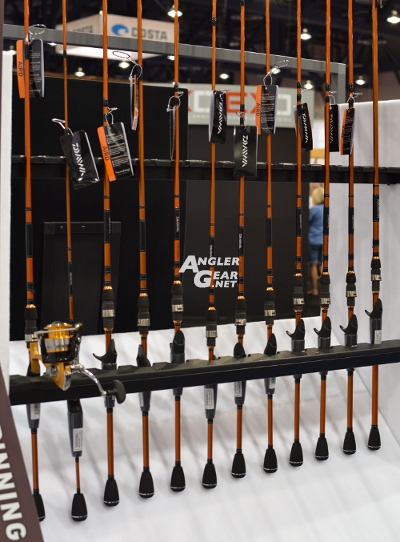 Pure Fishing: Always working to improve their brands and lineups.

Dropping in at the Pure Fishing booth I was fortunate enough to meet up with a few knowledgeable product managers to learn about some cool new bass gear. As usual, I was particularly interested in what Abu Garcia had to offer.

The highly hyped MGX made its debut alongside the Villain series of rods.  This rod and reel combined make for one sweet combo that is a step above the Revo Premier and Verdict. The Orra SX and Orra S spinning reels, which utilize design elements from last years Revo Spinning reel, made their debut.  Also, a refresh on the “Max” lineup was certainly impressive for those who are looking for a sub $100 baitcast reel (pre-assembled combos with matching rods are also being released).

The Veritas lineup was expanded with two new cranking models(7′ and 7’6″ m), a 7’11 flipping stick, and a number of micro guide rods. The Vengeance rod series got a design refresh (from its awkward orange), and the new “Ike dude” youth combo seemed like a cool setup for youth anglers as well. New lines from Berkley included Nanofil, Armour coated Trilene XL, Pro Spec Salwater co-polymer, and blaze orange Fireline. There is also a new Fenwick smallmouth rod series, as well as, a made over lightning rod. The Supreme and President spinning reels from Pfleuger got a makeover as well. Lastly, with the acquisition of Sebile the hot new item is the single hook D&S Crank. In brief, the Purefishing team has been hard at work making lineup improvements as usual. Great Job Guys! 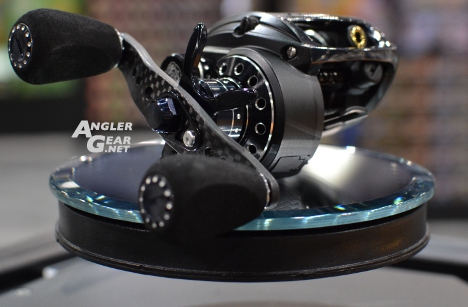 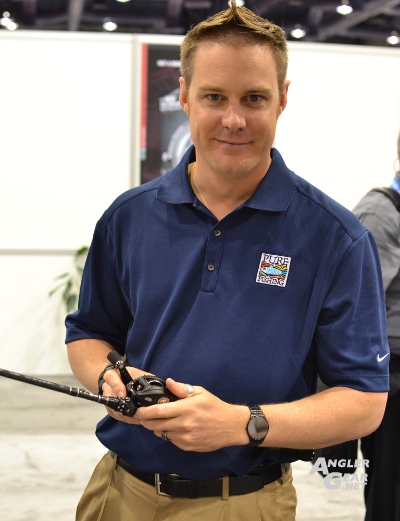 A passionate and knowledgeable guy.  Abu Garcia Product Manager Andrew Wheeler was definitely excited to release the MGX and Villain 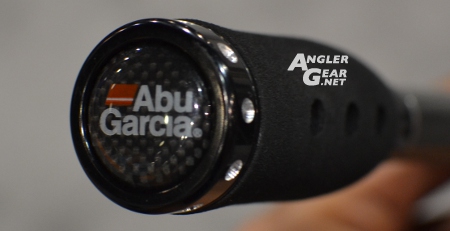 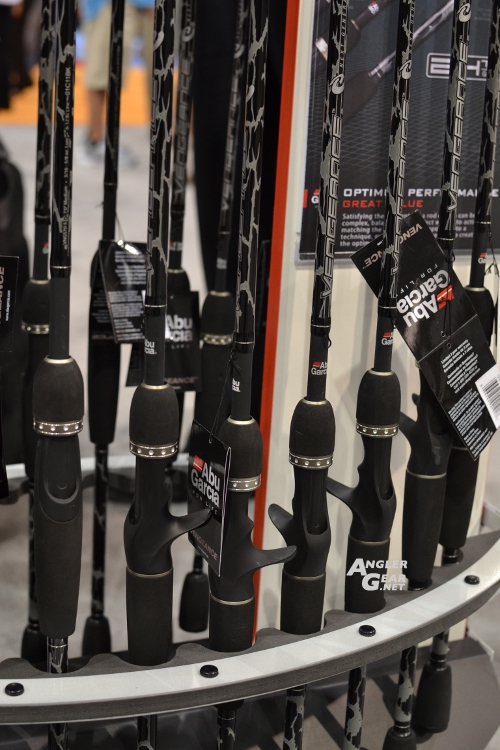 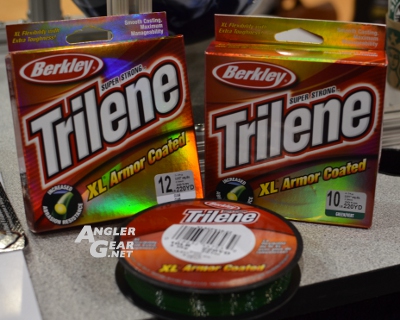 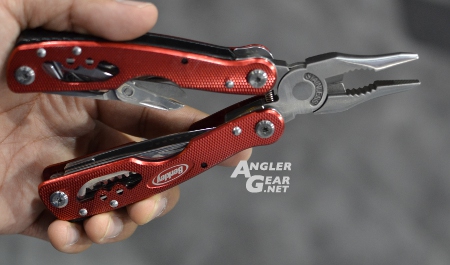 Shimano is a major player that has a history of bringing great reels to ICAST and has continually evolved their lineup to meet the demands of diehard anglers around the world. This year their latest bass angler oriented releases include a new Sustain and Stradic.  There is also a slew of “new “baitcast reels. Namely the entry level Caius, Citica and Curado G, and Chronarch E.  Moreover, the Convergence, Clarus, Compre and Crucial Rod series all got a makeover as well.

Honestly, I was most interested in the Sustain FJ that I had previously seen in the New Product Showcase.  Offered in 5 sizes (1000,2500,3000, 4000,5000) this reel definitely feels smoother thanks to borrowing X Ship from the Stella.  The CI4 rotor helps cut down the weight and the removable kickstand seems like a plus to mitigate boat rash.

The baitcast line up had me perplexed as it seems that Shimano made a jump to focus on streamlining tooling and manufacturing rather than bringing a “game changing” reel to the fold. None the less, I’m sure many anglers will still be happy to procure a few of these new reels. The revamp to the low end rod line up was certainly needed and I like the technique specific butt cap detail. All being said, Shimano should be bringing the goods next year… 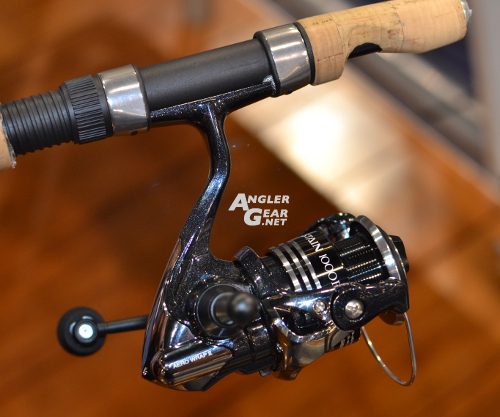 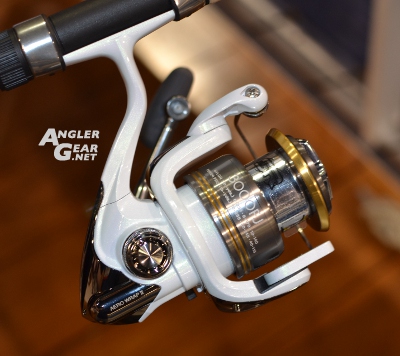 Shimano Stradic FJ (Back to white) 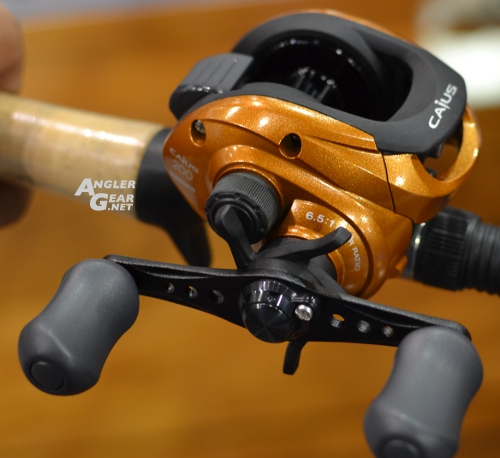 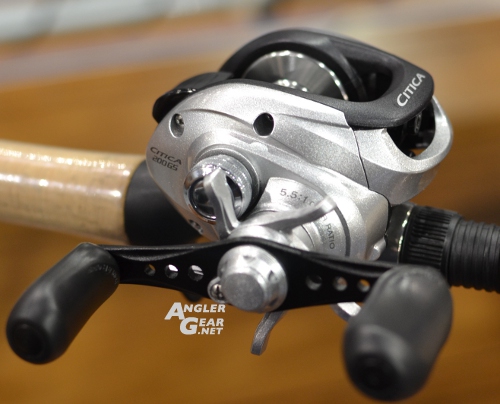 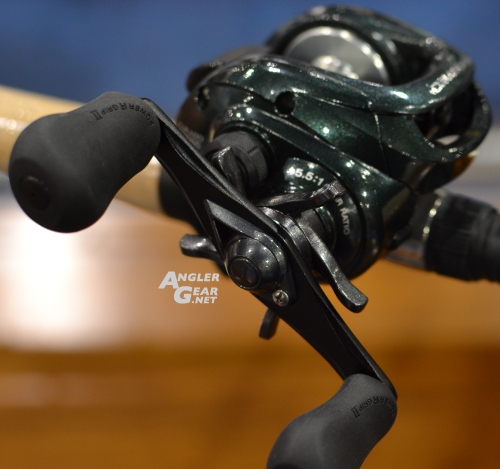 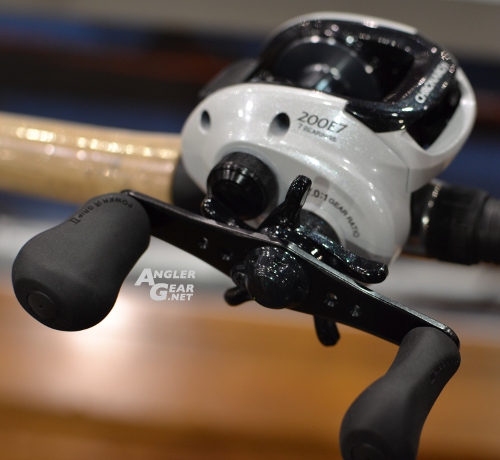 Update Aesthetics and performance features on the Convergence, Clarus, Compre, and Crucial Series. 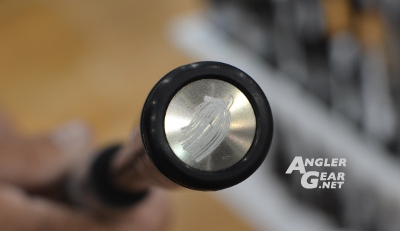