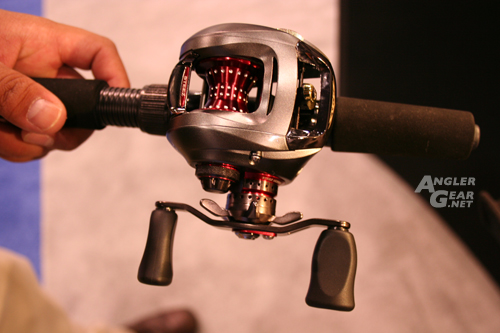 3) Daiwa Steez 7.1:1 baitcasters 103SHA and 100SHA
Its hard to deny the power the Daiwa Steez has over bass fisherman.  The first time I had the chance to hold one I was instantly amazed at the fact that a bass fishing reel could be so small and so light and look so stylish.  I knew my days out on the water would never be the same fishing with an all Steez combo and I was right.  Fishing with a Steez setup all day only makes you want to sell all your other gear and procure and all Steez line up ( I wish!)  Daiwa most certainly knows this and has taken advantage of their Steez allure with the introduction of the 103SHA and 100SHA. These two reels are tempting offerings for those anglers looking for a high speed counterpart to their standard Steez reels. With performance features like a 7.1:1 (29.8 IPT) gear ratio, 5.6 and 5.7oz weight, magnesium frame and handle side plate, Swept handle, A7075 tempered aluminum drive gear, A70705 aluminium alloy spool, Magforce V magnetic breaking system, and 11 bearing system these reels are in a class all their own.  It’s also easy to notice that the red accents on these reels match perfectly with  the Steez Compile X rods and make it tempting for those influenced by the infamous “bait monkey” to give in.  However with an MSRP of 479.99 for one of these high speed beauties its pretty hard not to notice that you could get an “all Zillion” combo for just about the same amount. 2) Daiwa Zillion Rods and Reels
Daiwa is a company that understands what bass anglers like, the type of performance they expect from their gear, and where the market trends are headed.  The new Daiwa Zillion rod and reel lineups are a perfect example of taking innovation and performance to the next level for bass fisherman.

The USDM Zillion lineup is now complete with the introduction of the new Zillion Hyperspeed Special Edition and Zillion 4.9 Highpower.  The 7.3 is a 50th anniversary model that is individually serial numbered and has a 7.3:1 (32IPT) gear ratio (the fastest in the world for a bait caster).  Whereas, the 4.9 is essentially a carry over of the Japanese “Crazy Cranker” reel that has a 22 IPT retrieve for those who like to fish crank baits and other lures where a lower gear ratio is desirable.  Both of these reels as well as the other two US Zillion models (7.1:1 SHA and 6.3:1 HA) can now be matched up with their own Zillion rods!

The new Zillion rods are comparable to the Steez models but at a much more affordable price.  These rods feature low resin HVF (High Volume Fiber) graphite as opposed to the Steez’s SVF (Super volume Fiber).  They also feature Daiwa’snew Zaion™ reel seats, Fuji New Concept Sic Guides, and Air Foam Grips (like the Steez rods).  Zaion is a Daiwa’s proprietary high strength, lightweight, corrosion resistant carbon composite.  They’ve introduced it not only on their new Zillion rods but also on the new Fuego spinning rods and reels.  It wouldn’t surprise me to see this composite integrated into a lightweight high performance baitcaster in the near future.  At any rate the new Hyperspeed Special Edition currently retails for $299, the Zillion 4.9 for $269.99, and the Zillion Rods for $199 to $249.99 depending on the model. 1)  Shimano Curado 200 E
It should come as no surprise that this reel would is my top choice for my “I want that” list. One of my first baitcasters was in fact a mean “green” Curado and even though it’s been placed on the backburner over the years as newer and better reels emerged, I still have fond fishing memories when I think or hear the name “Curado”.

As soon as word broke out that this reel was coming to the market it took top spot on my “I want that” list. In fact, once it became available for pre-order, I was one of the first in line to get one. At any rate, it’s been a little over a month since I’ve handled and admired this reel at ICAST 2008. Much too long to wait even for this patient angler! I finally received my very own Curado 200E7 in the mail just a few days ago and it was a welcome surprise after a long day at work. It took just under five minutes to pull my Curado 200 E7 out of its box mount it on my 6′ 8″ Shimano Cumara and spool it up with some 14lb test mono.

I took the rig outside and got her ready to go by tying on a spot remover with a zoom trick worm. Brake set up was a breeze with the now 1/8 turn access side plate (Curado D = 1/4 turn, Curado B = too many turns, then side plate falls to the floor!). Of course I set up the typical two breaks out on the spool and easily launched the 1/8 oz shaky head and trick worm off into the water. Retrieve felt smooth as usual; however I did note minor back play in the handle at lower drag settings (grrrr). Clickable drag star (Calais DC transplant) is nice, though I wish the cast control knob clicked as well. Hooking into my first bass with this reel felt great and cranking the fish in with Shimano’s HEG gearing definitely made me feel like I was in complete control of the fight. After that first fish, I immediately thought to myself, “Well it looks like the 200DHSV is sitting on the shelf from now on”. Though, it’s not like it got too much use from me anyways. I must say that after fishing with the new Curado 200 E7 for about four hours in total over the past few days I’m quite impressed!

Shimano hit the nail on the head with this reel and I like it much better than my Curado 200DHSV and Curado 200B. The size difference between all of these 200 class reels is quite dramatic and in terms of ergonomics, the Curado 200E wins hands down. With a 7.6 oz weight, low profile, and low reel seat stance, there is little to be desired as far as holding and fishing with the reel is concerned. The spool is essentially the same as the one found in the 200D with the exception of some minor machining differences and overall shaft length. The palm-ablity is definitely a plus and the large septon grips (same size as 200 D) are comfortable and help you feel in control.

My next test is to spool this bad boy up with some 50-80lb braid and mount it on my “punching” rod to see how much abuse it can handle after a day of flipping and pitching a 1.5 oz weight and craw around. My only major qualm so far with this reel would be that it hasn’t been made available in a 6:1 gear ratio. However, the new Citica 200E will take care of that need (once it starts shipping from retailers), and it might even be possible to swap out Curado Gears and replace them with the Citica’s. Regardless, I certainly see at least one Curado 200E5 and Citica 200E on the horizon to add to my “Weapons of bass destruction”.

In Summation, after my positive experience with this reel I definitely can see the new Curado E and Citica E climbing to the top of the bass fishing reel food chain, once again making many bass boat decks a sea of green.

Here are some pics of the reel:

Note that the Green finish is much more impressive outside in actual sunlight. P.S.  All of the gear mentioned in this last post can be procured from one of my favorite eBay sellers: Simmons Sporting Goods. They are top notch and have always treated me well. I highly recommend them!