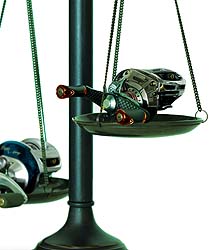 Earlier today Tackletour.com kept the ICAST 2008 previews coming and released some shots of the new Quantum Tour Edition PT and Energy PT Baitcasters. Finally after weeks of checking out KVD and other Quantum pros boat decks on ESPN’s coverage of the Bassmaster Elite series I get to see some new gear! (Thank you Tackletour!) You would think Quantum would at least let KVD of all people test and start promoting their new product in order to build up some hype. Though, to be fair, last week Mark Zona did share some information on KVD’s custom cranking rod he used at the Bluegrass Brawl. However, I’m not sure if it will be made available to the public any time soon.

At any rate, the new Tour Editions step down into the 7oz class, come stock with a carbon fiber handle, and ergonomically sport an overall lower profile.  All I can say is wow Quantum! … what took you so long? I must add that I will miss the deep blue titanium deposition finish from the previous iteration.  Yet, all that red will surely match well with their superlite rods. The new Energy PT baitcasters also look aggressive and ultra modern with their subdued overall finish and multicolored titanium deposition highlights.  I am also rather curious about this new micro ACS cast control system.  Anyways, with new features abound, this looks like a change for the better for Quantum.  Moreover, it also appears that the new Curado E, Citica E, and Revos will surely have some competition coming their way this fall.  You know, with all of the new reels that are going to be hitting shelves after ICAST 2008 I can feel many anglers’ wallets getting lighter already! 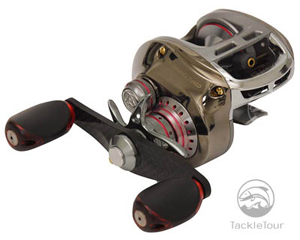 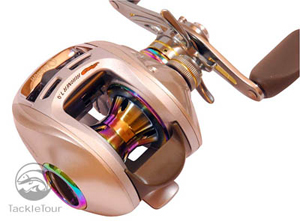