Bass fishing fans everywhere have their curiosity peaked as there’s a rumored future release (Most likely after ICAST 2008) of a new version of the highly respected Shimano Curado Baitcaster.  After apparently losing ground in the $100-$200 price range category to Abu Garcia’s Revo line, and Daiwa’s competitively priced Advantage, Tierra, Megaforce and Exceler reels, Shimano is set on reclaiming their stake. Sure rebates might have boosted sales, but anglers always want more in this competitive market. Tackletour.com released “spy photos” of a new green reel on May 2nd, however, given the distance the photos were taken it’s hard to really discern any new features.

As luck should have it, two photographs have been circulating on forums for the new Citica E (sister to the Curado line) and Curado E. These photos truly seem legitimate, given both reels identical design features. Borrowing styling cues from last years Core one can recognize the aggressive forward turned drag star, originally transplanted from the Calais 200DC, as well as the stamped handle, magnumlite spool, and septon grips. The 200E7 Designation will most likely prove that these reels are a 200 size next generation “E” (current Curado model is “D”), and have a 7:1 gear ratio.

Amongst most bass anglers wish lists for this “New” Curado line is a lighter weight in the 200 sizes (Curado 200D = 9.8 oz? are you kidding?), HEG gearing, higher bearing count, different gear ratio models, left and right hand availability, and a sub $200 price, preferably around the competitive $150 retail price point. It remains to be seen whether or not these photos are just being released as fodder for anglers in order to generate market excitement. Hopefully more info on this new Curado will be leaked before ICAST in July to satiate the masses curiosity of this legendary reel. 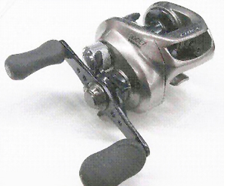 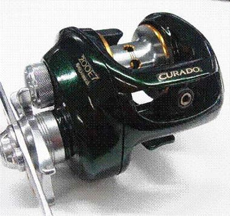 Images obtained from forum threads located at bassresource.com and tackletour.com

P.S. Current Curado D models can be found cheaply from these eBay sellers no need to worry about not catching the rebate!